The Old Song and the New…

Instruments of the Flesh…

In Christian theological terms, the melodies of the two loves are the “New Song”, sung by St. Paul’s “New Man”, and the “Old Song” of the “Old Man”.  A locus classicus of the theme is St. Augustine’s sermon De cantico novo, in which the New Song is, of course, charity, and the Old Song, cupidity.

The biblical texts upon which this opposition was hung are, in the Old Testament, from Psalms:

Praise the Lord with harp: sing unto him with the psaltery and an instrument of ten strings. Sing unto him a new song. (Ps. 33)

O sing unto the Lord a new song; for he hath done marvelous things: his right hand, and his holy arm, hath gotten him the victory.  The Lord hath made known his salvation… (Ps. 98)

The same formula is repeated in Ps. 144 and 146; but it is in Second Isaiah that it has the typological potential that claimed the attention of the early Christians.  In chapter 42, Isaiah addresses the Suffering Servant as a “bruised reed that shall not break”, and a “light of the Gentiles to open the blind eyes, to bring out the prisoners from the prison, and them that sit in darkness out of the prison house”.   This isfollowed by the verse:

Behold, the former things are come to pass, and all new things do I declare:  before they spring forth I tell you of them.  Sing unto the Lord a new song, and his praise from the end of the earth…

The New Song of the New Things is, in Christian typological allegory,  the New Law, as opposed to the Old Law that has passed away.  It is this song that is sung by the four and twenty elders before the Lamb in John’s vision in Revelation 4, and again, in 14, accompanied by the 144 thousand redeemed of the earth:

And I looked and, lo, a Lamb stood on the mount Sion, and with him a hundred forty and four thousand, having his Father’s name written in their foreheads.  And I heard a voice from heaven, as the voice of many waters, and as the voice of a great thunder; and I heard the voice of harpers harping with their harps:  And they sung as it were a new song before the throne, and before the four beasts, and the elders:  and no man could learn that song but the hundred and forty and four thousand, which were redeemed from the earth.

Manuscript illuminations of medieval Psalters illustrate the opposition between the New Song, as the sacred song of praise of God, and the Old Song, as the sort of carnal “melodye” made by such so-called courtly lovers as Chaucer’s Nicholas and Absolon.  In fig. 29, we see David in the upper panel leading the musicians in the Canticum Novum, while in the panel below, the devil plays the drums and leads a group of dancers and jongleurs in the song of the flesh. 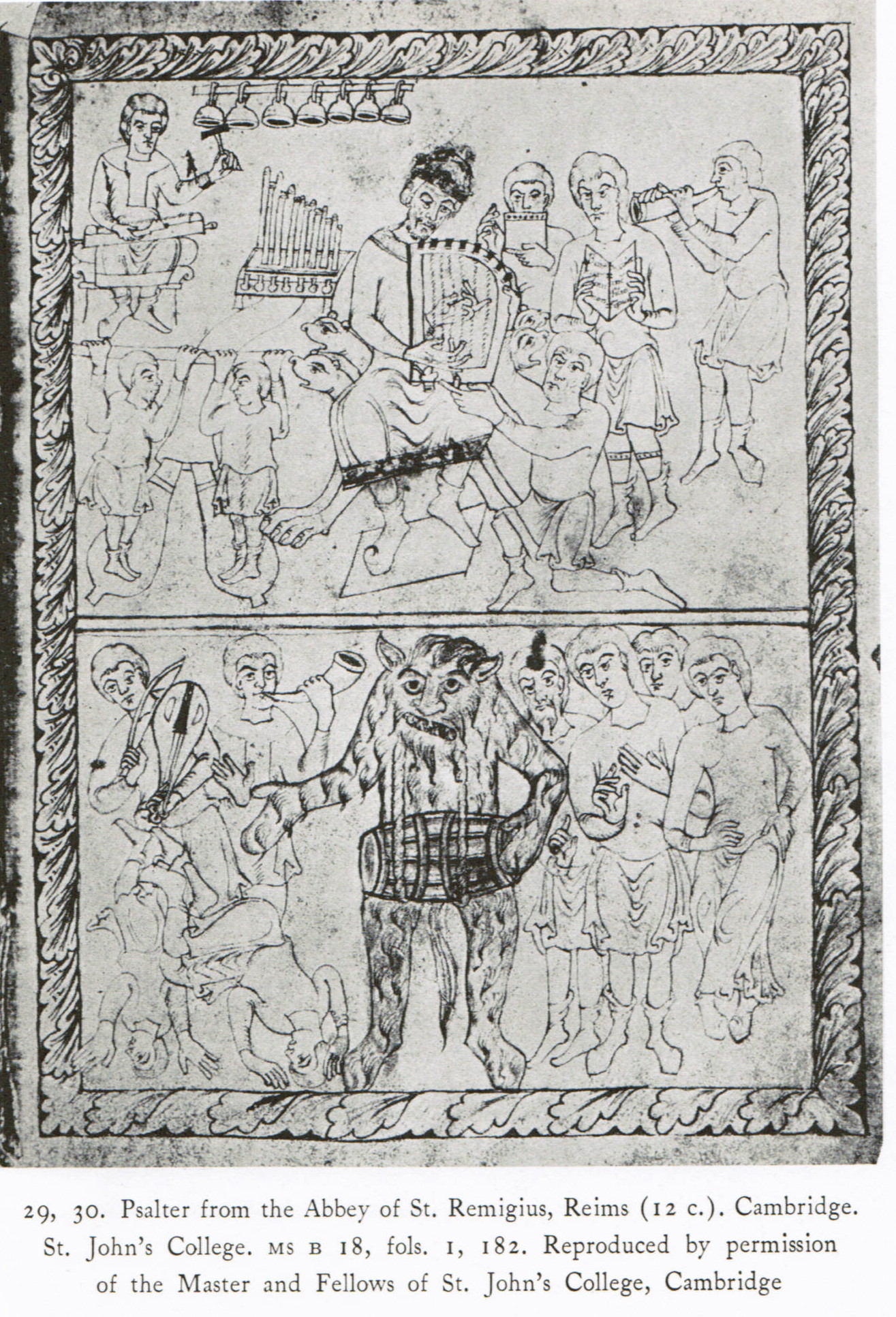 In fig. 31, we see, in the initial, the ringer of bells, the conventional representation of sacred harmony, and in the lower margin, a contrasting image of the melody of the flesh played by a young man to his lady. 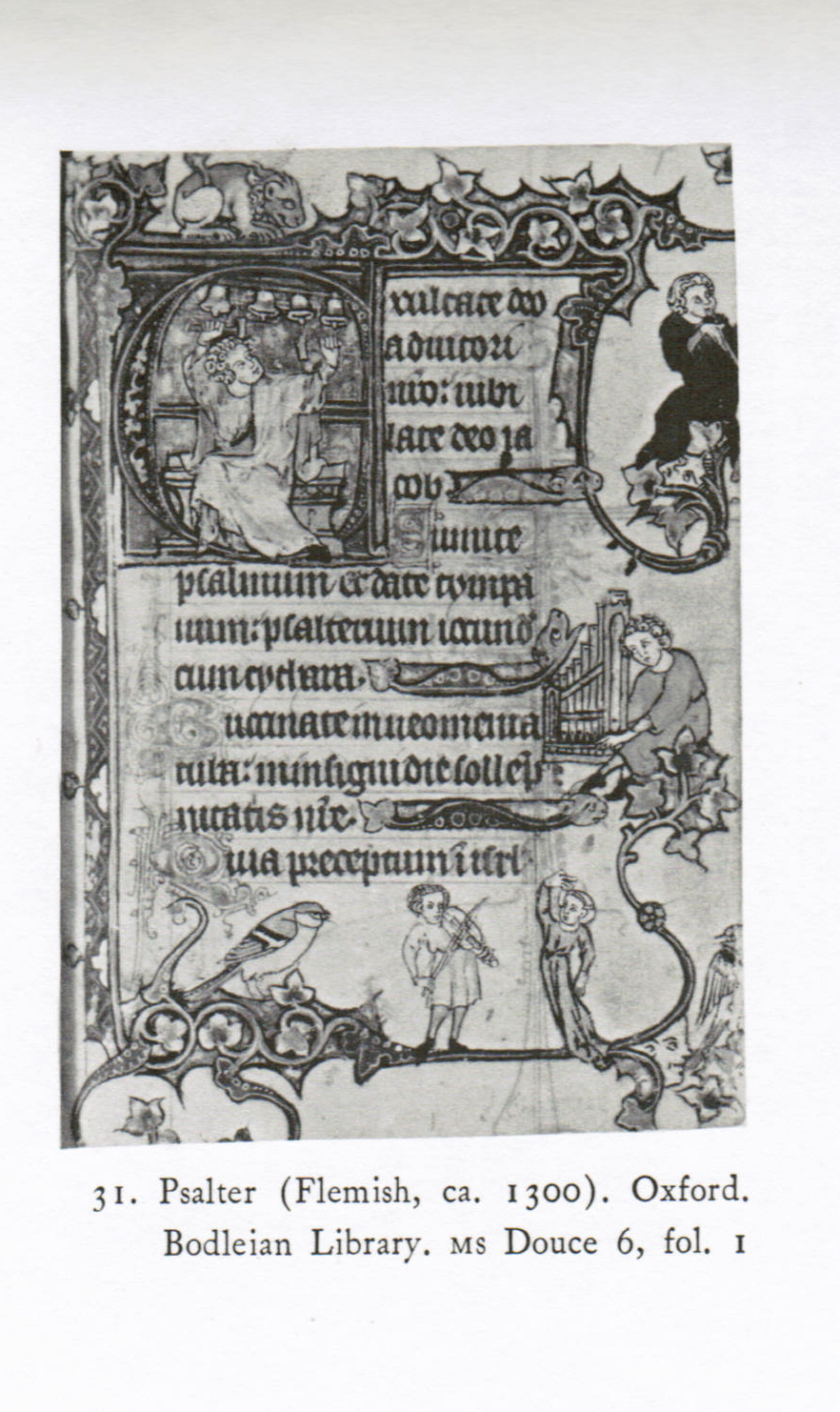 In fig. 32, the same bellman appears again in the initial, while the male grotesque on the left plays a bagpipe for the amusement of the female grotesque in the lower right. 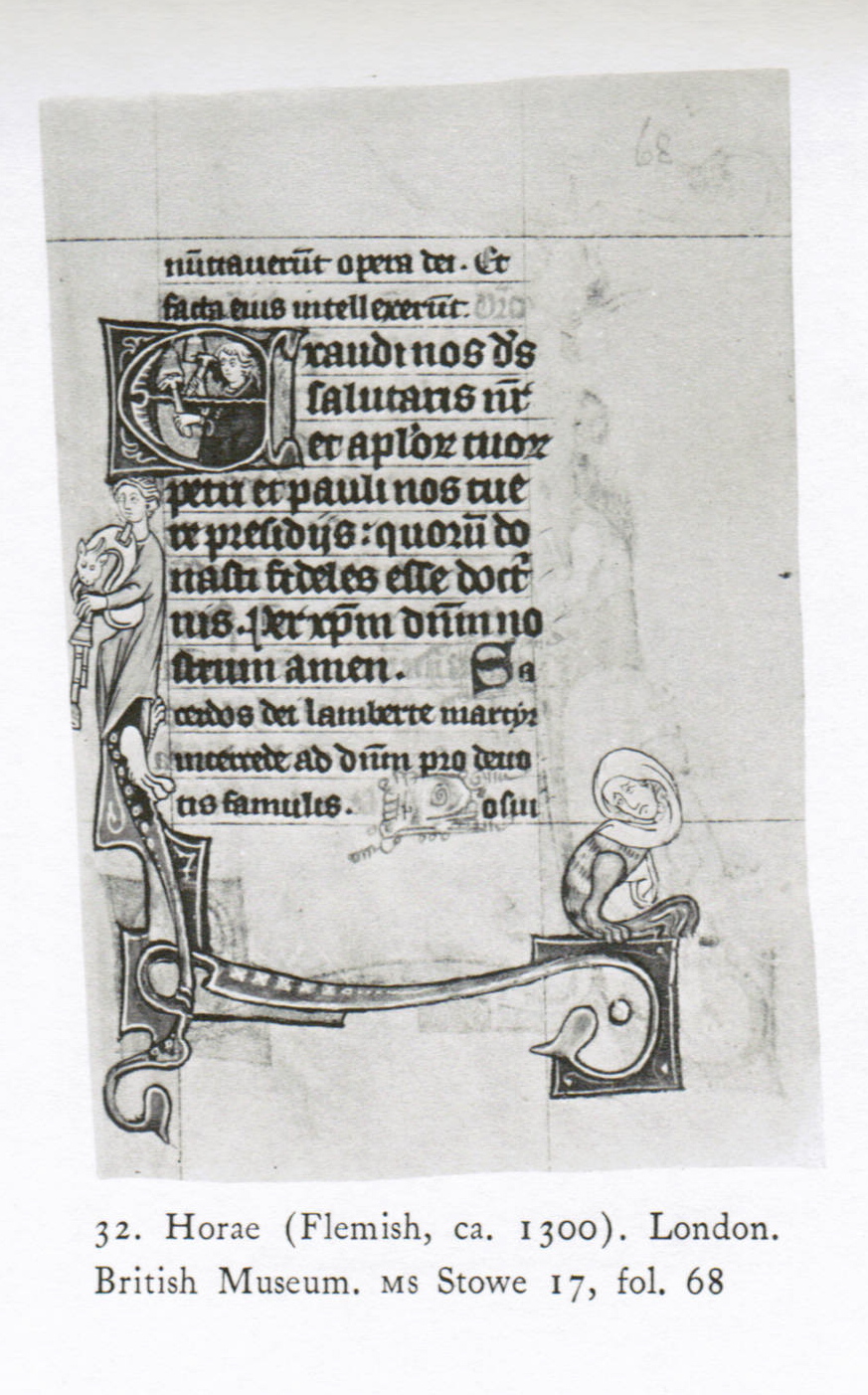 For reasons that have much to do with its, shall we say, anatomy, the bagpipe is commonly the instrument of the medieval “courtly” lover.  We see it again in the lower margin of fig. 33, its music inspiring the lady to do somersaults, while in the initial above, David is seated at his harp, the celestial city rising in the background.   Below, an image of David’s victory over Goliath symbolizes the defeat of pride, carnality, and worldliness. 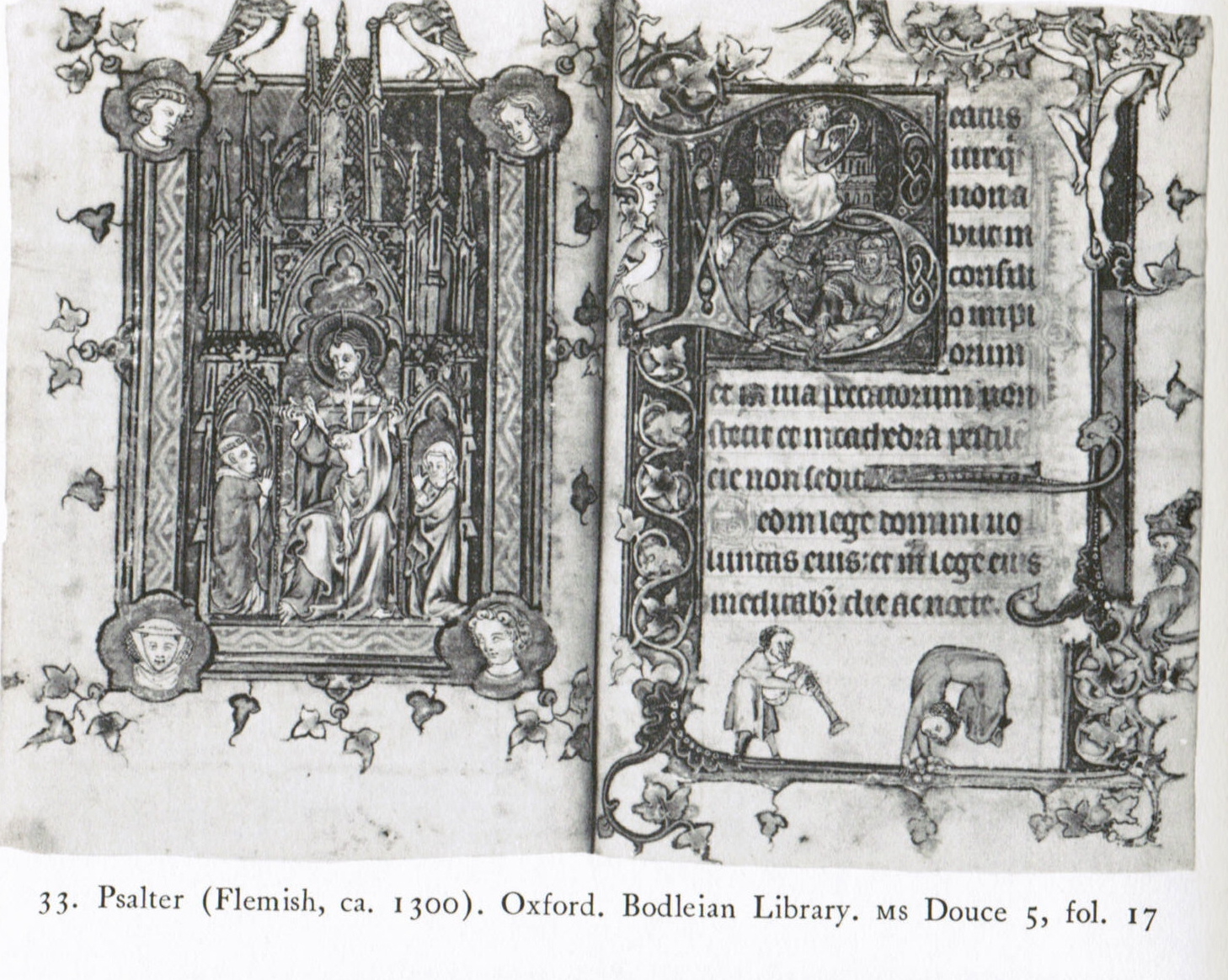 But instruments other than bagpipes might do just as well as phallic symbols, as we see it in fig. 38, where the moral humour depends upon a sort of visual pun on the Latin word instrumentum, which means both musical instrument and the male member:  thus, in Chaucer’s Wife of Bath’s Prologue, the Wife is often encouraging her husband to use his “sely instrument”. 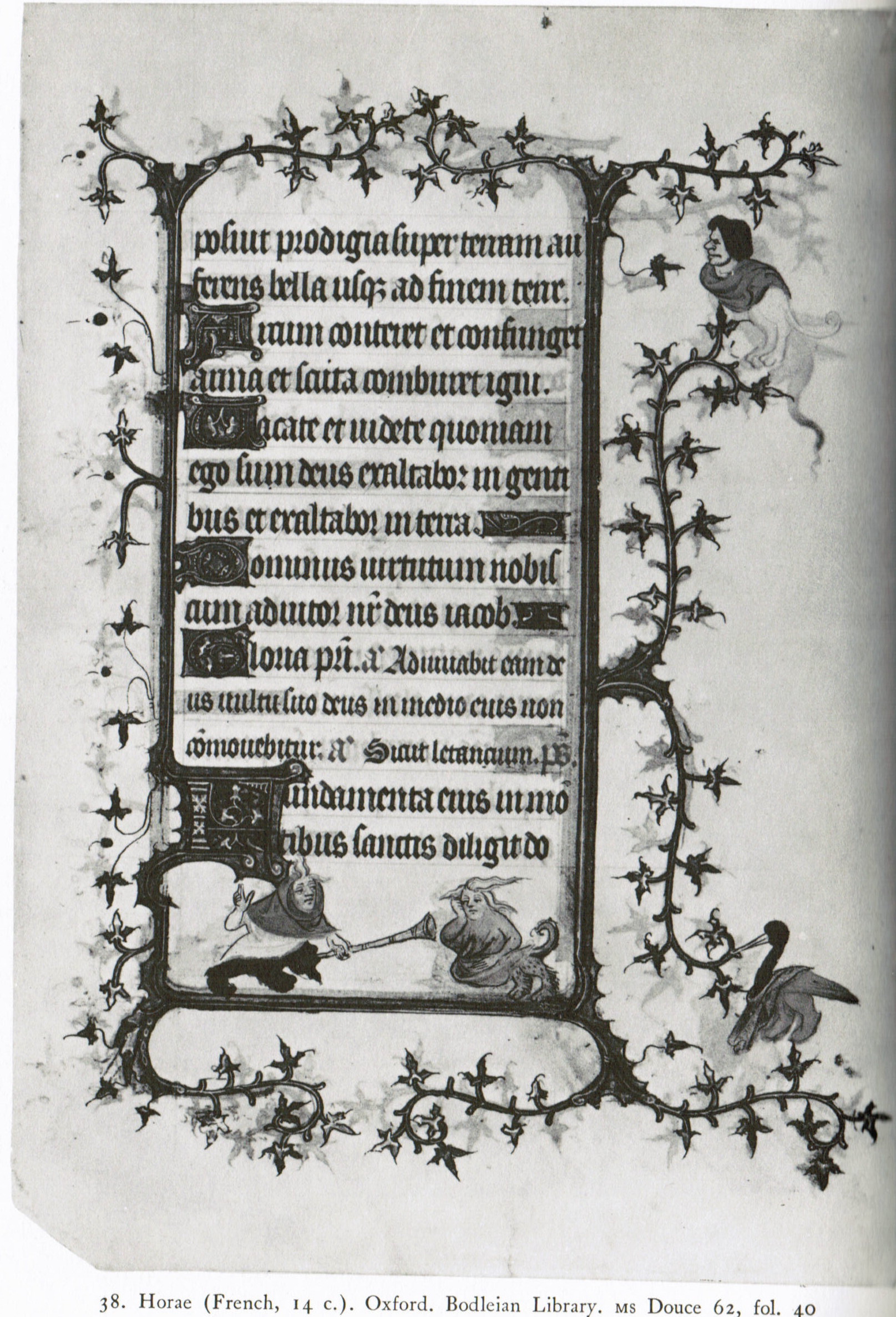 Finally, the meaning of the music of the flesh can be illustrated explicitly, as we see in fig. 34 (the “Ymago Luxuriae”, or emblem of Lust), from Guido Faba’s treatise on the vices.  Here the man clutching the vielle and the man clutching the woman in bed are to be identified as making the same “melody” upon their instruments. 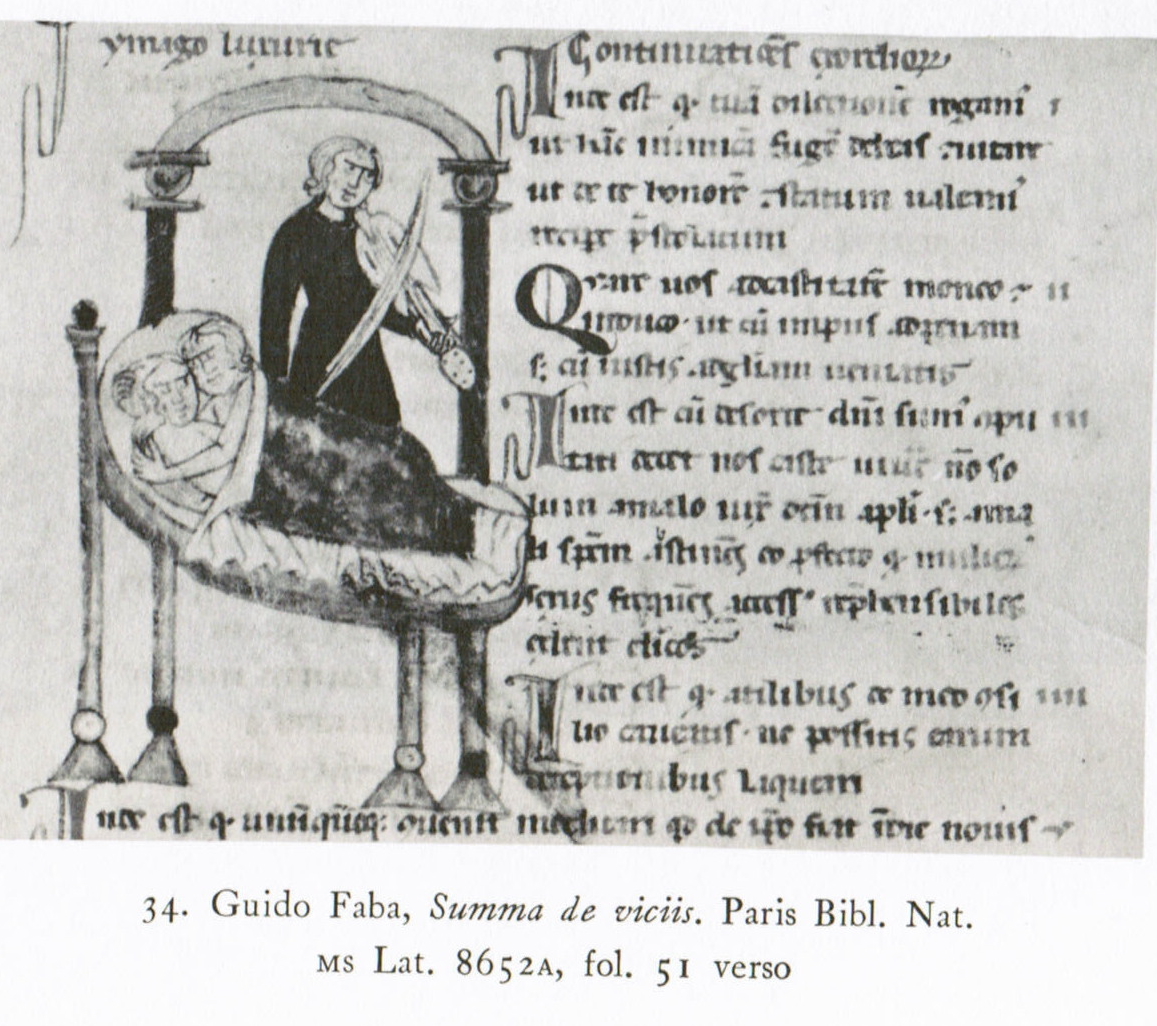