“Idolatry” in the Middle Ages…

The Myth of Pygmalion in Medieval Commentary…

Pygmalion, Narcissus, and the Dreamer…

The didactic sententiousness of Jean de Meun’s c. 1277 “continuation” of Guillaume de Lorris’Roman is, if anything, even plainer.  At over 15,000 lines–it swamps the original–, it is too long for anything more than cursory treatment here.  Two sections near the end of the poem are of special relevance, however, to the themes and topoi we have been tracing in these essays:  Jean’s digression on the myth of Pygmalion, and his beautiful description of the “Shepherd’s Park”.

The moral relevance of the myth of Pygmalion to that of Narcissus and, by extension, the plight of the dreamer, will become clear enough.  But before turning to Jean’s paraphrase, it will be useful to preface it with a little medieval sermon on the subject of idolatry.

In medieval symbolism, idolatry means far more than “worshiping graven images”–hardly a problem in the high Middle Ages–but refers, once again, to an attitude of mind.  Robert Holcot, an English friar who was a contemporary of Chaucer, explains the meaning of “idolatry” in his commentary on the  Book of Wisdom.  In connection with the verses, “Give not the power of thy soul to a woman lest she enter upon thy strength, and thou be confounded”, and “Turn away thy face from a woman dressed up, and gaze not upon her beauty”, Holcot explains that the beauty of a woman is a snare (one of the conventional images of lust, as we’ve seen from both Andreas and Guillaume de Lorris) and a false idol, and quotes another verse from Wisdom, “the beginning of fornication is the devising of idols”.  Then he comments, “For it is impossible for a curious and lascivious man associating with these idols not to be corrupted by them; indeed, a man, diligently seeking out and considering in his thought the beauty of women so that he makes idols for himself, necessarily prepares for his own fall” (my emphasis).

An “idol”, therefore, is not always a concrete image, but can be one constructed in the mind, such as the images of feminine beauty that, as we’ve already seen, are set up and fixed in the imaginations of those suffering from the passio of love.

Now, the story of Pygmalion is introduced at the point in the poem at which Venus is about to release her arrow at a statue of a woman, sculpted out of silver, and erected in a sort of shrine.  It is noteworthy that Venus is not aiming at a lady, or even at the dreamer’s rose, but at an idol (as one can see from figure 17), which is to say, at the image into which the rose has been turned by the dreamer’s desires. 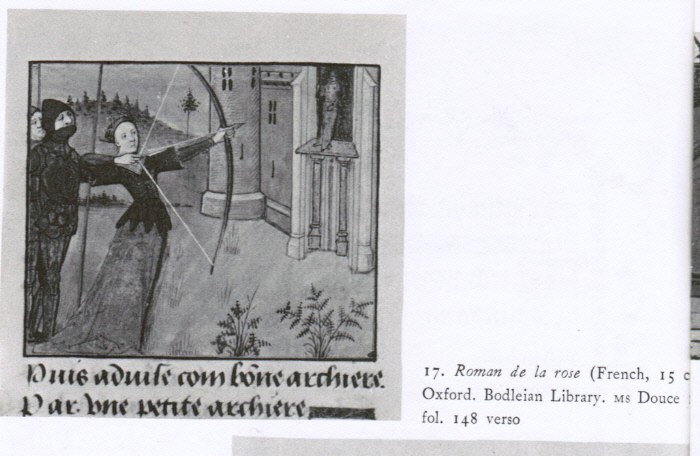 The poet then compares this image to the statue of Pygmalion, so beautiful that Pygmalion fell desperately–in his case, one would have to say, madly–in love with it.

In the course of his long lamentation, as Jean recounts it, Pygmalion affects to find a certain consolation in comparing himself to Narcissus, who fell in love with “sa propre figure”, just as he has fallen in love with “his own figure”, which at least, unlike Narcissus, he can dress up, kiss, fondle, and even take to bed with him (figure. 19), though his statue remains disappointingly unresponsive. 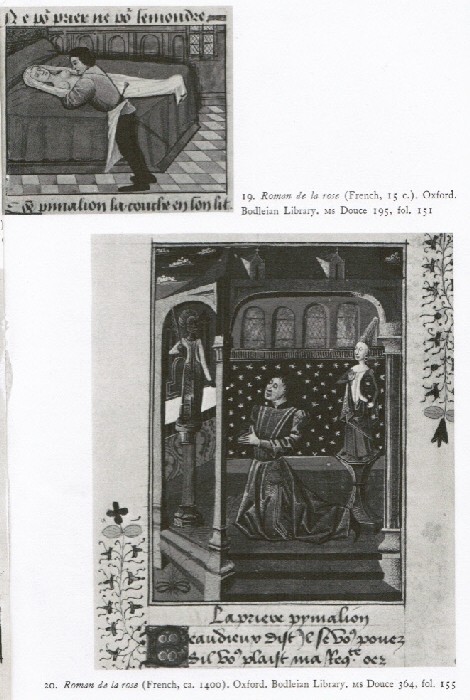 It is interesting that Pygmalion, in a state which he himself describes repeatedly as “madness”, executes all of the conventional gestures and undergoes all of the obligatory sufferings supposedly enjoined by the “code” of courtly love:  the reversals of mood, the feelings of rejection, and yet the certainty that but a single smile from his lady would repay all his pain, and so on, with the implication that the supposedly “courtly” behaviour of the dreamer is equally unhinged.

Finally, Pygmalion prays to Venus.  In figure 20, one notes that (as this scene was conventionally illustrated in medieval manuscripts of the Roman), both Venus and Pygmalion’s statue are set upon pedestals, and are thus also depicted as idols.

Venus, obligingly, answers Pygmalion’s prayer, so that when he returns to his image, he is astonished by what he finds.  “What is this?”, he asks.  “Have I been deceived.  Am I awake?  No, this must be a dream.  No one has ever seen a vision so beautiful apart from a dream.  How has this marvel occurred?  Is it some phantasm or fiend that has entered my image?”

Now, the romantic sensibility has tended to prettify the story of Pygmalion into a fairy tale like those in which the frog always turns into a prince, or an exemplum of the heroic power of art to outdo nature; but neither Jean de Meun nor his audience would have been quite so credulous of, or sentimental about, this supposed miracle.

As Arnulph of Orleans, a twelfth-century commentator on Ovid’s Metanorphoses, explains, “Ovid says the statue of Pygmalion was changed into a living woman.  As a matter of fact, Pygmalion made an ivory statue, and conceiving so irrational a love for it, persuaded himself that it was alive and began to abuse it as though it were a real woman.”  But if Pygmalion became so aroused in pursuit of his fantasy that the pleasure generated by it caused him to lose all reason to the point of convincing himself that the statue had come to life, he was simply doing what Guillaume’s lover did in his own dream when he imagined his rose lying naked in bed beside him.

At the end of his re-telling of the Pygmalion myth, Jean de Meun apologizes for his long digression from the narrative, adding, “However, you shall see what all this means before my tale has reached an end.”  Like Pygmalion, the dreamer too has created an “image”, an idol in the mind such as those described by Holcot, which is warmed and animated by the flame of his own runaway passion.  But when his rose has been transformed by the magic of this passion and he is on the verge of fulfilling his desires, he suddenly awakens.  The fantasy created by his fevered imagination dissolves like the proverbial Castle in Spain, into thin air.