The Mirror of Narcissus…

The Mirror of the Mind…

Looking into the fountain, the dreamer sees two marvelous crystal stones in which are reflected a hundred different hues:

Just as a mirror will reflect each thing
That near is placed, and one therein can see
Both form and color without variance,
So do these crystals undistorted show
The garden’s each detail to anyone
Who looks into the waters of the spring.
For, from whichever side one chance to look,
He sees one half the garden…

But then he remembers Narcissus:

The Mirror Perilous it is, where proud
Narcissus saw his face and his gray eyes,
Because of which he soon lay on his bier.
There is no charm nor remedy for this;
Whatever thing appears before one’s eyes,
While at these stones he looks, he straightway loves.
Many a valiant man has perished thence;
The wisest, worthiest, most experienced
Have there been trapped and taken unawares…
There a new furor falls to some men’s lot;
There neither sense nor moderation holds
The mastery; there will to love is all;
There no man can take counsel for himself.
‘Tis Cupid, Venus’ son, there sows the seed
Which taints the fountains, and ‘tis there he sets
His nets and snares to capture man and maid;
For Cupid hunts no other sort of bird…

But the dreamer still insists on gazing into the fountain:

Long time it pleased me to remain to view
The fountain and the crystals that displayed
A hundred thousand things which there appeared.
But I remember it as sorry hour.
Alas, how often therefore have I sighed!
The mirrors me deceived.  Had I but known
Their power and their force, I had not then
So close approached.  I fell within the snare
That sorely has betrayed and caught full many a man.

Well, the mirrors didn’t exactly deceive the dreamer; he should have “known their power and their force” from the warning label that explained that Narcissus died as a result of looking into them.  The dreamer’s attempt to exculpate himself is patently unconvincing; but then this is a perfect example of a medieval poem that cares little for realism or psychological verisimilitude.  On the level of the allegory, there is no ambiguity whatsoever.  The dreamer is re-actualizing the myth of Narcissus, and the moral folly of which it is a universal admonitory exemplum.  He is submitting himself to the fate of those countless wise and worthy men whose moderation and reason “could no longer hold the mastery” against the “furor” (that is, the madness) of their all-consuming love, and who thereby ended up in Cupid’s bird-snare.

The bird-snare of pleasure is another common medieval topos.  The early tenth-century theologian and poet Odo of Cluny expresses it as follows in his famous philosophical epic on the Redemption, Occupatio:

And just as bait draws flying birds to the snare,
Wicked appetite draws those moved by its sweetness.
Fixed in the lime, they cannot stretch their wings;
They lack devotion to virtue and the wings to fly.
Hunger for a little morsel makes them hungry forever.

We see the bird snare of pleasure in the illuminations of a number of fourteenth-century Psalters, accompanying the text from Ps. 123: 7, “Our soul hath been delivered as a sparrow out of the snare of the fowlers”.  The bait in the snare (according to the fourteenth-century Glossa Ordinaria on this verse) is “dulcedo huius vitae”—the sweetness of this life, as opposed to the sweetness of the spirit.

This moralized imagery belongs to a larger complex in which Satan is conceived as hunter or a fowler stalking human prey.  In the Roman, this is not coincidentally the occupation of Cupid; but it is the mirror imagery of the well of Narcissus—the Mirror Perilous—that is emphasized above all by Guillaume.

Let me remind you of the allegories of the Fall discussed earlier from John the Scot and Chaucer’s Parson, according to which the crucial stage is that in which the image of the object of beauty becomes fixed in the sensual imagination and the focus of “pleasurable thought” or “excessive meditation”.  This, as you recall, was also the crucial stage, according to Andreas Capellanus, in the lover’s passio.  Here, again,  is the relevant text from Andreas’ De amore:

Love is a certain inborn suffering derived from the sight of and excessive meditation upon the beauty of the opposite sex…That this suffering is inborn I shall show you clearly, because if you will look at the truth, and distinguish carefully you will see that it does not arise out of any action; only from the reflection of the mind upon what it sees does this suffering come.

The Mirror Perilous is, in other words, the mirror of the mind in which the image of the beloved (in the case of Narcissus, himself; in the case of the dreamer, a rosebud) is meditated upon obsessively.  This is the same mirror, of course, that medieval artists depict in the hand of the personification of Luxuria, which is also, as we have seen, carried by Oiseuse (Idleness), the porteress to the garden of Deduit.

The same mirror is visible in figures 15 and 16, in the latter, being held by a Siren, while in both, the women gazing vainly into it do so to the accompaniment of the Old Song, played (in fig. 15) on the bagpipe. 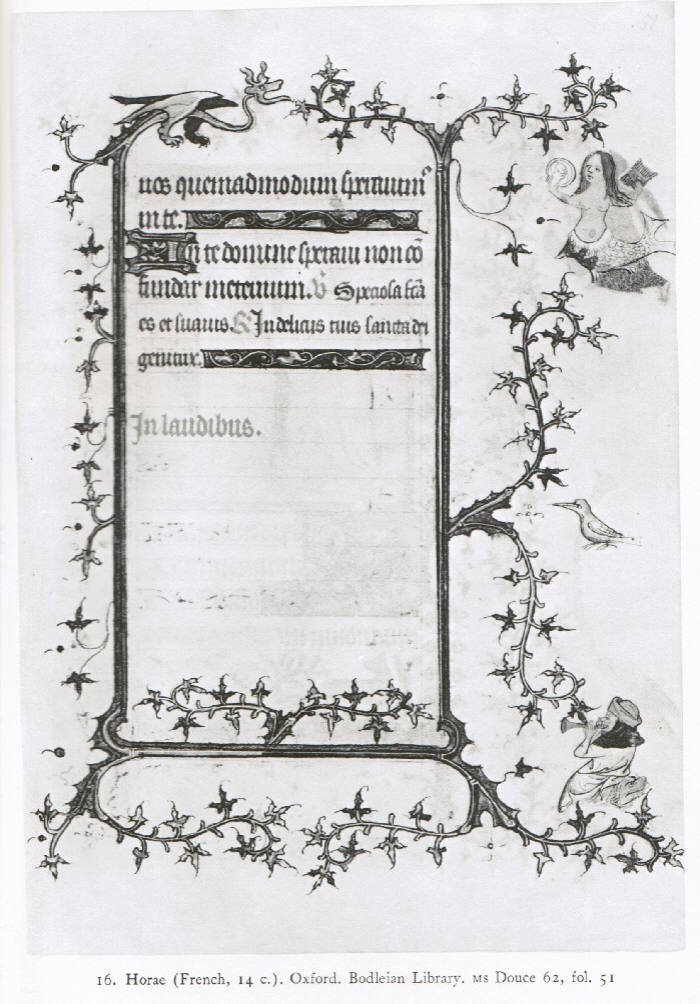 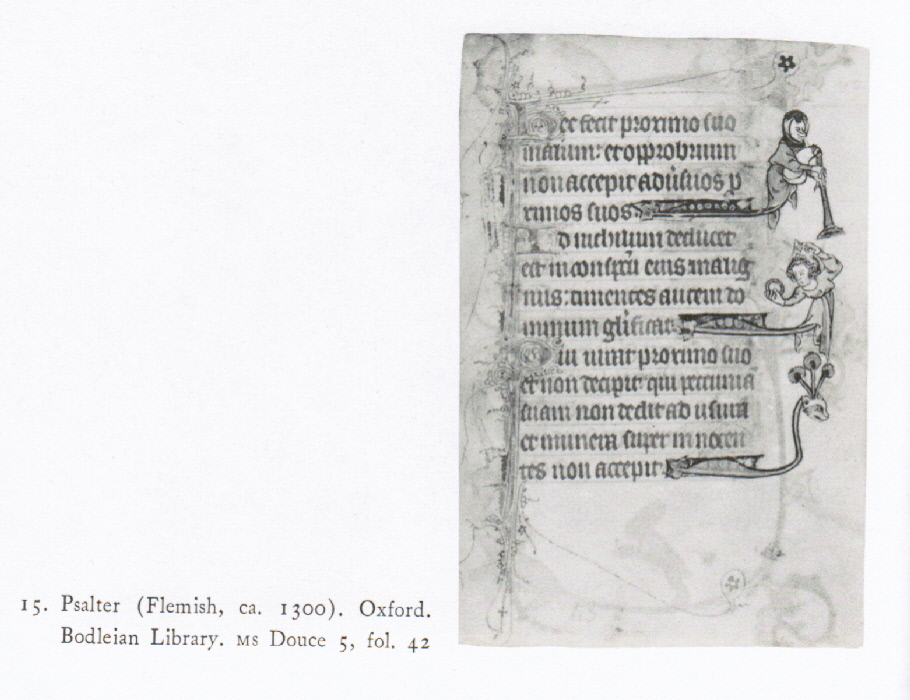 The two crystals that the dreamer sees in the well of Narcissus are, obviously enough, reflections of his own eyes, and at the same time the mirrors that reflect images of the garden through them onto the mirror of the mind.  As the dreamer gazes into them, he sees a profusion of beautiful flowers (the conventional symbols of the transient beauty of the world and the flesh), and these bring him unimaginable delight.

Amongst them he sees a rosebush, whose beauty enthralls him:

And such desire
Then seized me that I had not failed to seek
The place where that rose-heap was on display
Though Pavia or Paris had tempted me.
When I was thus o’ertaken by this rage,
Which many another better man has crazed.
Straightway I hurried toward the red rosebush.

“Rage”, “craze”, and so on, are words from clinical psychology, and indeed, as we have already seen, love of this kind was typically diagnosed in the Middle Ages as a kind of full-blown mania or mental illness.  It is the same “craze”, as the dreamer recognizes, as that which gripped many a better man before him.