The Two Songs and Two Dances of Love…

The Edenic Garden as the Archetype of Medieval Literary Gardens…

The Edenic Garden and the Garden of the Soul…

Either of the two songs might plausibly be accompanied by a dance.  In fig. 40 we see an angel leading the saints in a dance; the music he is playing is clearly the heavenly harmony of praise for the Creator which–since the angels inhabit the planets and stars as their animating souls or “intelligences”–is also, as we have seen, the harmony of the spheres.  (The idea of the movements of the planets as a dance is once again traditional, going back to Plato’s description of them in the Timaeus.)

In fig. 41, we see, by contrast, the dance that accompanies the decidedly earthly music of bagpipe and drum. 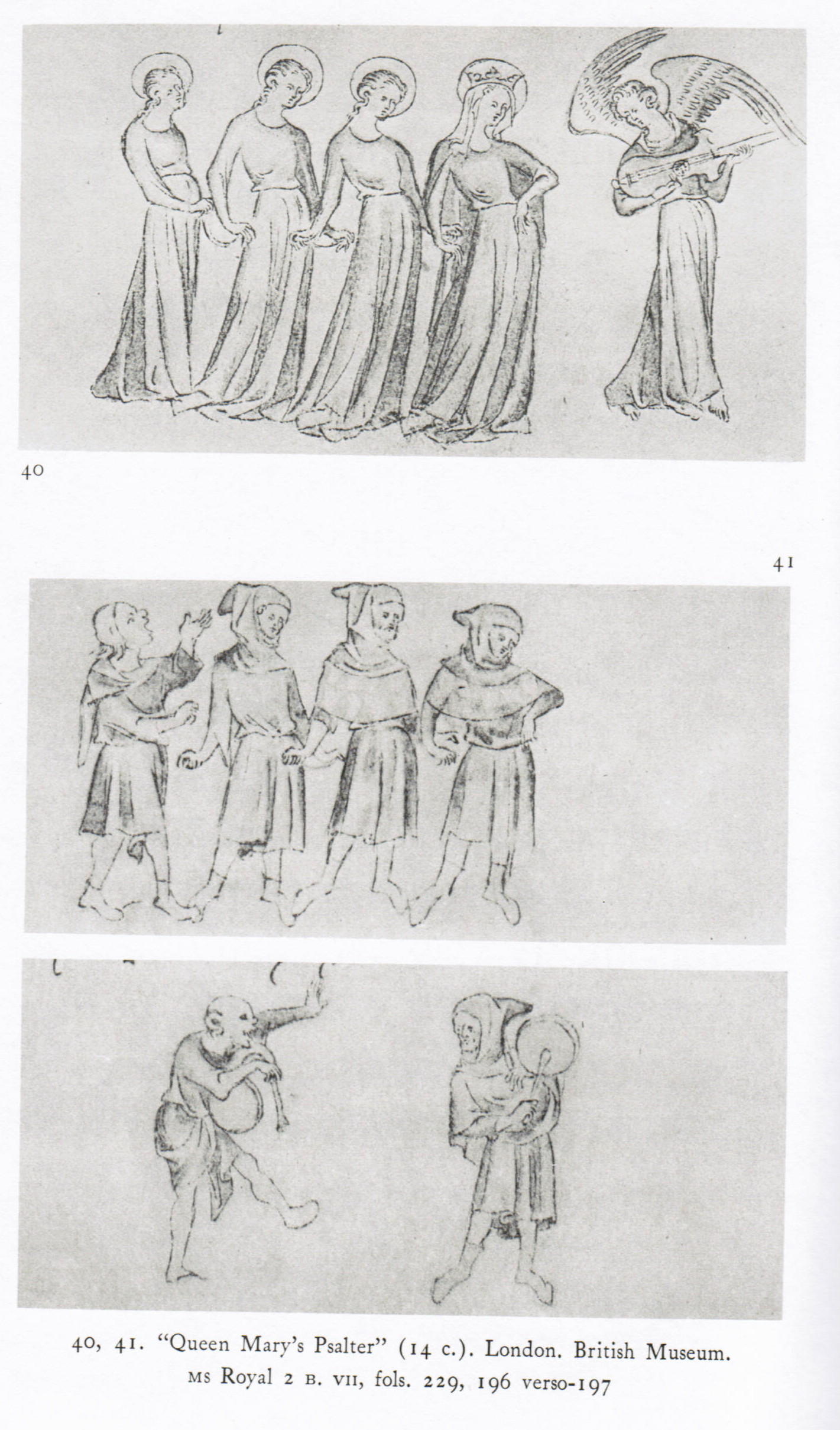 This dance may be compared to the one illustrated in an illumination (fig. 42) from a ms. of theRoman de la Rose.  It shows the dance that takes place in the pleasure garden of Deduit (Sir Mirth), led by Gladness (Sir Mirth’s consort), who plays the bagpipes. 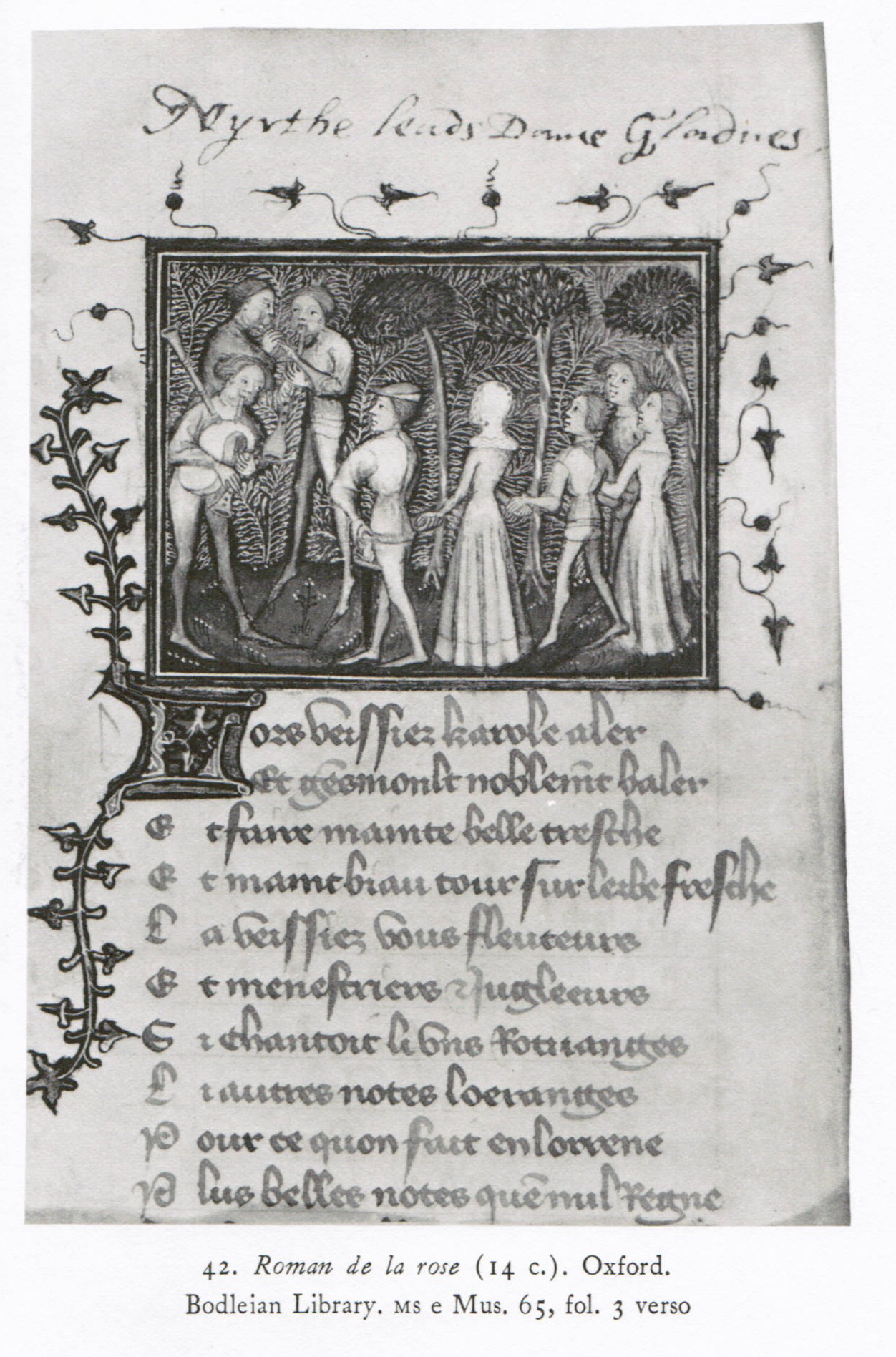 I’ve had occasion to mention the Roman de la Rose many times thus far, and it now seems appropriate to look at it somewhat more extensively, since it is the prototypical poem of “courtly love”.   Not coincidentally, therefore, the Roman gives expression to all of the themes and oppositions—music in its celestial and earthly modes; love in its celestial and earthly modes—that we have been treating.

But before we turn to this celebrated medieval poem, there are a few more commonplace ideas and themes connected with the medieval doctrine of love that we must consider.

The action of the Roman, as you may know, takes place in a beautiful walled garden:  a garden that strikes the dreamer-protagonist as a “terrestrial Paradise”.  In anticipation of what is soon to follow, let me just say that in pre-modern Christian literature, almost every garden cannot help but evoke the biblical garden of Eden, the archetype of all literary gardens.  As Chaucer’s Parson explains, every sin is, morally and psychologically speaking, a recapitulation of the Fall of Adam and Eve, and inasmuch as every sin occurs within the depths of the soul, every human soul is also, morally and psychologically speaking, a garden.

In the garden depicted by the author of the Somme le roi, both the Seven Virtues and the Seven Deadly Sins were conventionally conceived as the branches of two trees, the former, the Tree of Life, the latter, the forbidden Tree of Knowledge; the trees on which the virtues and vices are represented are thus the two trees of the Edenic garden; but Eden here is obviously enough also a figure for the spiritual garden that resides universally in the human interior.

The most famous, and for us, the most relevant, allegorical exposition of the biblical Paradise as a symbol of the garden of the soul is that of John the Scot, the ninth-century Christian Platonist and exegete who is known pre-eminently as the translator and commentator on the works of the seminal sixth-century mystic Dionysius the Pseudo-Areopagite.

In his treatise On the Division of Nature, John envisages Paradise as a figure for human nature in its totality, which is divided into an inner and outer region:  the inner region is the “Man”, also called Nous(hence this is the habitat of the mind or reason), and in it dwells the Logos, that is, the eternal Reason of God.  This region of the garden also contains the Tree of Life, and the Fountain of Life, from which flow the four rivers of Paradise (which are in turn the four classical or cardinal virtues).  The interior region of the human garden should, moreover, be “married”, as John admonishes, to the exterior; in the same way that Christ, the head and sovereign of the human person, is married to the Church, his body.

The outer region, then, is the “Woman”, also called Aethesis (that is, the science of Beauty), since it is the habitat of the corporeal senses and, as John writes, the “vain and false fantasies” that arise from them.  In this part of the garden are placed the Tree of Knowledge and the Serpent, called “delightful thought”.

Now it is obvious that in a figural garden of this kind, whatever sensible image that impresses the outer region as beautiful must be referred to the inner region for judgment.  But this does not always happen, since men are frequently inclined to act “effeminately”, rather than virtuously.

John explains these moral choices using the hypothetical example of a golden, gem-encrusted vase which is brought before two men, one wise, the other avaricious.  The image of the precious vase enters the corporeal senses (the Woman) of both men; but the wise man immediately refers its beauty “to the praise of the Creator of natural things”.  (He practices, as we will see, what Augustine calls caritas:  the use of the beautiful things of this world for the sake of the contemplation of the Creator who is the Source and Archetype of Beauty per se.)  The avaricious man, on the other hand–instead of understanding the beautiful vase as a symbol of the invisibilia dei–, retains its sensible image in the “Woman”, which delights in its beauty for its own sake, or for the sake of personal vanity or gain, so that it becomes lodged, as an object of fascination, in the Woman’s imagination; whence the avaricious man eventually “plunges into a foul pool of cupidity”.

Once again, John’s allegory of the Fall is to be understood as an exemplary description of a process that is re-enacted by every sinner.  The critical stage occurs when the image of a beautiful thing is received in the corporeal sense (in the “Woman”, Aesthesis) and then becomes fixed there, as the focus of pleasurable thought.  If this delight is not nullified by the reason–if the reason consents to it–, the result is the corruption of the inner garden, just as Eve corrupted Adam.

If, on the other hand, the image of beauty becomes the vehicle for the contemplation of the Beauty of the Creator, the “Man” remains “married” to the “Woman”; that is, the reason retains its proper hierarchical ascendancy over the senses; the spirit continues to guide its servant, the body; and there is no “adultery” committed.